Cyropaedia: The Education of Cyrus 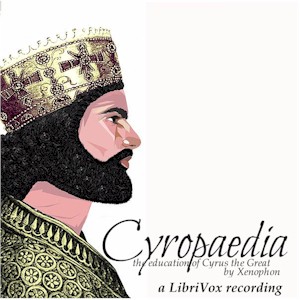 Cyropaedia: The Education of Cyrus

LibriVox recording of Cyropaedia: The Education of Cyrus by Xenophon. (Translated by H. G. Dakyns.)
Read in English by Larry Wilson; Lynne T; John Ottens; Kane Mercer; Peter Gardner; Lucy Perry; Omar H. Eldahan; John Martin; Anna Simon; Rosie Roberts; Emory; Mark Chulsky; J. McDougall
The Cyropaedia (or Cyropedia) is a partly fictional biography of Cyrus the Great, written in the early 4th century BC by the Athenian gentleman-soldier, and student of Socrates, Xenophon of Athens. The title Cyropaedia derives from Greek, meaning "The Education of Cyrus". Aspects of it would become a model for medieval writers of the genre known as mirrors for princes. In turn it was a strong influence upon the most well-known but atypical of these, Machiavelli's The Prince, which was an important influence in the rejection of medieval political thinking, and the development of modern politics. However, unlike most "mirrors of princes", and like The Prince, whether or not the Cyropaedia was really intended to describe an ideal ruler is a subject of debate. - Summary by Wikipedia
For further information, including links to online text, reader information, RSS feeds, CD cover or other formats (if available), please go to the LibriVox catalog page for this recording.

Uploaded by librivoxbooks on September 14, 2016